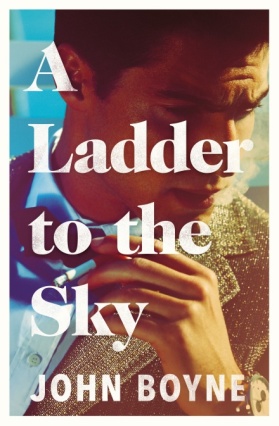 ‘Maurice Swift is handsome, charming, and hungry for success. The one thing he doesn’t have is talent – but he’s not about to let a detail like that stand in his way. After all, a would-be writer can find stories anywhere. They don’t need to be his own.
Working as a waiter in a West Berlin hotel in 1988, Maurice engineers the perfect opportunity: a chance encounter with celebrated novelist Erich Ackermann. He quickly ingratiates himself with the powerful – but desperately lonely – older man, teasing out of Erich a terrible, long-held secret about his activities during the war. Perfect material for Maurice’s first novel.

Once Maurice has had a taste of literary fame, he knows he can stop at nothing in pursuit of that high. Moving from the Amalfi Coast, where he matches wits with Gore Vidal, to Manhattan and London, Maurice hones his talent for deceit and manipulation, preying on the talented and vulnerable in his cold-blooded climb to the top. But the higher he climbs, the further he has to fall..’

I’ve been quite lucky with the books I’ve been choosing to read lately – most of them have been absolutely brilliant, with one or two exceptions. ‘A Ladder To The Sky’ was, thankfully, not one of those exceptions – it is a great novel.

It begins with the perspective of Erich Ackermann, a successful novelist who spots the young and beautiful waiter, Maurice Swift. What follows is a book tour, which Ackermann invites Maurice to accompany him on, hoping that their friendship will blossom into more.

The perspectives change as the book continues, between Maurice Swift and some other main characters. And also as the story continues, we begin to discover just how odious a character Swift really is.

Blinded by his own ambition but hindered by his own lack of talent, he is ruthless in his pursuit of fame and recognition. There is, quite literally, nothing he will not do to get the credit that he thinks he deserves.

Boyne does a masterful job of creating a main character that, while hugely unlikable, is also captivating, and in spite of myself, I wanted to read more about Swift, and to see just how low he would stoop. He was so well written – he was flawed, pathetic, and ruthless, full of a sense of his own importance, and willing to step over anybody, even his supposed loved ones in his efforts.

The supporting characters are also well written – without giving away spoilers it is almost impossible to say who and what they are to Swift, but they are integral to the plot, and they are crucial to us to discover just how devious Swift can be.

I also enjoyed that this was also a book about books, and the process that goes into writing them, getting them published, and getting them publicised, and how cut-throat the literary world can be. Also, for those of you who have read ‘The Heart’s Invisible Furies’, there are a few references to that book which I really enjoyed when I spotted them.

Overall, I really enjoyed this book. Boyne is a fantastic author. He doesn’t just write stories, he creates worlds, and characters that stay with you long after the last page has been finished and the book has been closed.

One thought on “A Ladder To The Sky – John Boyne”