Welcome to my stop on the blog tour for One Way Out by A.A. Dhand.

‘Bradford is under siege, hundreds of people held to ransom.

The demand? A simple exchange – four lives for a thousand.

The government is firm, they will not negotiate.

But DCI Harry Virdee’s wife is one of the hostages.

Sometimes the only way to save lives is to take them.’

DCI Harry Virdee is in Bradford’s city park with his mother and young son Aaron, when they are given a twenty minute warning to evacuate. There is a bomb set to detonate, placed there by a violent nationalist group calling themselves The Patriots. He has just enough time to get them to safety before the bomb explodes, leaving the park and surrounding areas in a thick covering of ash and smoke.

But there is worse to come – The Patriots have released a video explaining that there is a bomb in one of the city’s one hundred and five mosques. They won’t tell which one, and if anyone in any of the mosques tries to escape, they will detonate it, killing everone inside.They will only allow the worshippers to leave safely if all four leaders of the radical Islamist group Almuktaroon are apprehended, and brought to them, within a dictated time scale.

Harry Virdee is secretly tasked by the Home Secretary with finding the leaders, and delivering them into custody. The only reason he agrees? His wife, Saima, is in one of the mosques, and her life is in grave danger. Harry must trust his mother to care for his young son, while he puts his own reputation, and life, on the line, in an effort to catch the dangerous group leaders on time.

I really enjoyed this book. I love gripping thrillers, and this is definitely a gripping thriller. One Way Out is the fourth Harry Virdee novel, and, even though I haven’t read the previous novels, it was easy to follow and a real page turner. Based on this book, I would definitely be keen to seek out the rest of the books in the series.

The characters are likable, and believable, particularly the protagonist, Harry. He’s almost an anti-hero of sorts – a policeman with an unusual way of making sure the law is kept. He has a dark, violent and corrupt past, and a certain way of getting what he wants. He is highly skilled, he knows how to work people, and he values his job. His main motivation however, is protecting his family, and he will do whatever it takes to do that.

I also appreciated the fact that Harry isn’t the typical young, white, traditional cop. His religion, and the differing religion of his wife and his family is a real source of conflict in the book. In fact, religion is the biggest conflict in the story, with Muslims being targeted in their place of worship by nationalists claiming to be protecting their country. On a more personal level to Harry however, is the opposing views of his family, particularly his father, and his wife. Saima is a Muslim, and his father is a Sikh. His family, apart from his mother, refuse to acknowledge Saima and Aaron, which is a source of pain to all of them. The scenes where his father confronts his prejudice are really moving to read, and add depth to the story.

The most chilling thing about the book is how real it is, and how so much of what takes place in the book has already happened, and could potentially happen again in the future. Dhand has taken the very real threat of terrorism and extremism and used it to create and intense and edgy thriller, sure to make your heart race.

The story itself is gritty, dark and full of twists and turns – it definitely held my attention, and I couldn’t put it down. I really found it to be reminiscent of Steve Cavanagh’s ‘Eddie Flynn’ character, and the whole book had the same kind of feel, it kept reminding me of the Eddie Flynn books, both in pacing, and quality. I loved Thirteen, so it’s a favourable comparison!

While One Way Out can be read as a standalone novel, I do think it would be better if read as part of the series, as there were some references to previous events not explained in depth in the book. Not to it’s detriment, it just made me wish I’d read the previous books. (Streets of Darkness, Girl Zero and City of Sinners are the other titles in the series.)

I’d recommend this book to anyone who enjoys a good, well paced and tense thriller! 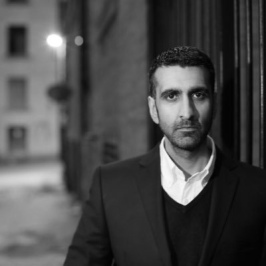 A.A. Dhand was raised in Bradford and spent his youth observing the city from behind the counter of a small convenience store. After qualifying as a pharmacist, he worked in London and travelled extensively before writing. The history, diversity and darkness of the city have inspired his Harry Virdee novels. 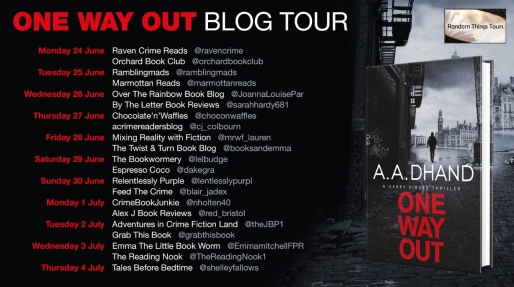 Thanks to Anne Cater and Bantam Press for inviting me to be part of the blog tour for One Way Out, and for supplying with me a copy of the book in exchange for a fair and honest review.