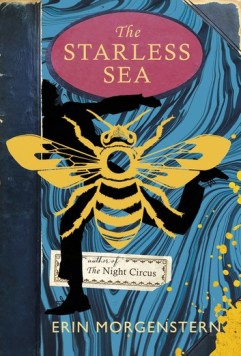 ‘When Zachary Rawlins stumbles across a strange book hidden in his university library it leads him on a quest unlike any other. Its pages entrance him with their tales of lovelorn prisoners, lost cities and nameless acolytes, but they also contain something impossible: a recollection from his own childhood.

Determined to solve the puzzle of the book, Zachary follows the clues he finds on the cover – a bee, a key and a sword. They guide him to a masquerade ball, to a dangerous secret club, and finally through a magical doorway created by the fierce and mysterious Mirabel. This door leads to a subterranean labyrinth filled with stories, hidden far beneath the surface of the earth.

When the labyrinth is threatened, Zachary must race with Mirabel and Dorian, a handsome barefoot man with shifting alliances, through its twisting tunnels and crowded ballrooms, searching for the end of his story.

You are invited to join Zachary on the starless sea: the home of storytellers, story-lovers and those who will protect our stories at all costs.’

Anyone who has read Erin Morgenstern’s first novel, ‘The Night Circus’, will be aware that she is an author with a unique imagination, and a new, fresh way of putting that imagination onto the page. She can weave a tale that captures your attention, and her stories will immerse you so completely that closing the book feels like coming up for air.

‘The Starless Sea’ is a layered masterpiece, with stories within stories, tales within tales – it’s like a fairytale for adults. I’m aware that I’m gushing, but I don’t even care, this book deserves it.

Reading this felt like taking massive, gooey bites of my favourite chocolate cake – it was delicious, and satisfying, and decadent. Every word deserves your attention, every word is important and builds the story.

There is a book within this book, read by the main character, and what, at first, seems like just a story, soon becomes crucially entwined in his life, and his destiny. Zachary Ezra Rawlins thinks he is a normal(ish) college student – a bit socially awkward, slightly reclusive, but on the whole, ordinary, until he comes across a mysterious, old fashioned book in the college library and somehow reads about himself in it. What follows is a twisting, intricate journey, full of bizarre characters, books, magic, and many, many cats.

‘The Starless Sea’ really is a treat for the senses – it’s so well written, so well described that you can almost hear the bees buzzing as you read, you can almost taste the honey of the starless sea, and you can almost smell the dusty, earthy smell of the oldest books in the vaults of the underground library.

It’s an adventure that will grip you from the first page to the very last, and leave you wanting more. I would happily read a series of books following the same characters, the same magical journey, just so I could stay with them for a little while longer.

At almost 500 pages, it’s not a small book, and it’s not a quick read. It’s full of detail, and takes some concentration to read, so you must be in the right frame of mind to read it – this is not a book that you can skim, there are too many details in the chapters. You need to dedicate some time to it, and trust me, it’s worth it.

I am so excited to see what Erin Morgenstern comes up with next – I will be keeping an eager eye out for her work!